What You Need To Know When Buying a Used Macan

If your just taking the initial steps to buying a Porsche Macan, this guide will highlight some of the technical issues to be aware of before you commit to buy this sporty crossover SUV.

The Macan was first seen in late 2013 and went on sale in the US in 2015. Originally Porsche was going to call the car the Cajun, but switched to Macan – an Indonesian word meaning Tiger, which pretty well describes the little sporty SUV. Early models are now out of warranty and affordably priced. In 2019 Porsche sold more than 22,000 new Macan vehicles in the US – that is more than the 911, 718 and Panamera combined and moves the Macan to the top selling vehicle spot for Porsche. Not bad for the little tiger!

Don’t make the mistake of comparing it to some other small SUVs – the Macan is all Porsche and likely has more expensive maintenance requirements than a domestic or Asian vehicle. With that said, the sales numbers tell the story in terms of just how good this car is. Potential Issues To Look For On A Used Macan The first step, once you’ve identified a suitable Macan, is to get it thoroughly inspected by a local independent expert. The pre-purchase inspection is designed to identify mechanical problems that may not be clearly evident at first glance. In the sections below, we’ve extensively highlighted those potential issues to be on the look out for. Getting a repair history on the car, if available, is helpful and will instantly identify or eliminate potential problem areas.

If a seller wont let you inspect the car, walk away.

Consider who is selling the car. If you’re buying from a used car dealer, do your research to learn where the dealer got the car. If it’s a dealer that specializes in Porsche, well and good.  However, if the dealer’s normal trade is low cost mini vans, you need to do some serious research. Cars are often traded when they need expensive mechanical repairs. 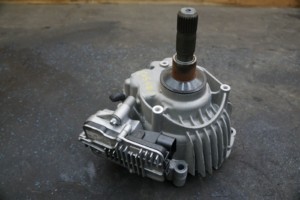 Many Macan owners have experienced vibrations or unsteady acceleration around the 25-35mph. This is usually subtle initially but gets steadily worse, especially when moving forward with the wheels turned. Sometimes, this can also show up as jerking when the PDK is going through 2nd to 3rd gears and accelerating to 30-50mph. The problem is caused by a faulty transfer case assembly.

The transfer case is a part of the four-wheel system. It directs the drive from the transmission to the front wheels and synchronizes the difference between the rotation of the front and rear wheels. It also features electronics which make the ability to control application of drive possible in differing circumstances or programs – off road, snow/ice or sport mode.

Wear in the transfer case causes a mismatch between intended wheel speeds during acceleration and subsequent vibration. It’s essential that you determine if the Macan you are thinking of buying has this issue or if the problem has been resolved in the history on the vehicle. The repair requires replacement of the transfer case and can be expensive. Don’t buy a Macan with an oil leak. Early Porsche Macan V6 owners commonly experienced the infamous oil leak from the timing case cover seal. Oil leaks can occur in any of the seals on the engine and the resultant oil leaking always heads south to the oil pan – so it’s important to identify the true source of the leak before jumping to conclusions. However, if the source of the leak is the timing case cover, check your wallet!

The issue originally stemmed from bolt problems during engine production and was subsequently addressed in later models. However, the timing case seal is still a very likely cause of oil loss in the future. Unfortunately, the repair is not simple and requires good knowledge and experience.

Because of the location of the timing case cover, the recommended way to resolve the leak is to first remove the engine. Typically this will be billed as a 40 hour job! Creative independent shops have found ways to make this easier and considerable cheaper but, this is not what you want to find shortly after buying a used Macan.

Chirp, Squeal or Whistle Off Accelerator Rev the engine to about 2K rpm and let your foot off. If you here what appears to be a belt chirp, the Macan actually has a fractured or fatigued metal exhaust mount or a cracked mid pipe exhaust plate bracket.

As the engine revs it torques side to side and these brackets are twisted. When they crack, the metal rubs together causing the sound. This can also show up as an exhaust rattle while driving.

This is very common on the earlier Macan but thankfully it’s not a difficult fix. Subsequent Macan’s have a revision to the exhaust downpipes that eliminates this problem. Test driving a Macan you might experience a clunk, vibrations or low frequency noise from the drivetrain. This stems from premature wear in the center support bearing of the driveshaft. The driveshaft also has a rubber coupling component that fails that can contribute to this. Look at the service history to see if this issue has been addressed in the life of the car.  If it hasn’t, you will almost certainly have to address it yourself.

If the experience associated with the early Cayenne is anything to go by, replacing the driveshaft with the same product from Porsche leads to a subsequent recurrence of the problem some more miles down the road. The more cost effective and long term solution is to use an aftermarket clamping bearing support which a good independent shop can do for you. Before buying any used car, it is essential to know when the last time the system fault codes were cleared and check the status of the emission monitors. It’s not difficult for a seller to clear the faults just before you arrive for a test drive. Clearing the engine faults also resets the emissions system to a state of “not ready.” Emission readiness tests often occur over multiple drive cycles. So, after a reset, emission faults may not return for a significant number of miles or drive cycles.

The V6 engine used in the Macan can develop a vacuum leaks and set a check engine light. There can be many causes, but one of the most common is the failure in the PCV system. A failed diaphragm in the oil separator on the valve cover allows unmetered air to enter the intake system and cause the engine to run lean. This fault may not return to be indicated on the dashboard as a CEL for a number of drive cycles, so understanding where the car is in relation to the emission monitor tests is critical. This should be part of any used car inspection by a competent repair shop.

Get Yourself A Little Tiger

The Macan does require care and likely more expensive attention than other comparably priced SUVs. However, there are a number of independent Porsche repair shops that can help to lower the costs of maintaining the car. In addition, while the Macan range is relatively young, we do have a list of the most common problems that are appearing with current owners.

We think the Macan is a all round great way to own a Porsche – this seems to be born out by the huge sales numbers and the top selling spot the Macan has achieved. It’s cute, fun and the turbo version can be a rocket with some tuning work.